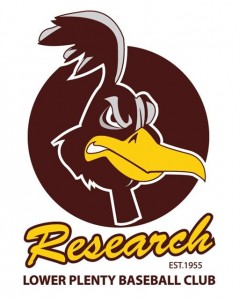 In a hard fought 4-2 win at La Trobe University on Saturday, Research were able to score three crucial runs in the fourth innings to seal the victory in what was a battle between dominant pitchers from both sides – Leigh McKay for Research and Andy Mann for GMBC. A healthy crowd was in attendance to cheer on the two Diamond Valley based sides.

After two strong catches from pitcher Mann then an incident at first base in the eight innings, Mann went out of the game to be relieved in the pitching duties by Matthew McQuiggan. McKay pitched all day for Reservoir.

A double by GMBC’s strong hitting Liam Crivelli in the ninth innings was not enough for them to snatch the lead and victory away from Research.

Their supporters erupted with joy and relief when they got the final out and claimed victory.

Dicker said it was a very well pitched game, and that both did an outstanding job on the mound.

He said the victory was hard to put in to words.

“This journey for me started when I was 17 years old. To be able to do it this year as coach with this group of players is just fantastic – you couldn’t ask for a better way to spend your Saturday arvo,” he said.

He praised the efforts of GMBC who he said were the benchmark of the league.

GMBC coach Chris Hodkinson said his club had played well all year but that Leigh McKay was the difference in the final game of the year.